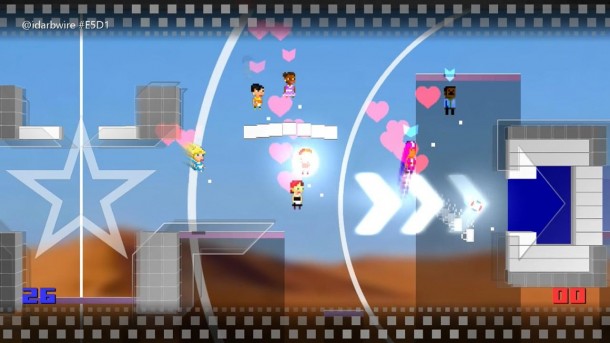 You're at a basketball game. The two teams are neck and neck in the fourth quarter. Suddenly, the crowd starts chanting, "Chum, chum, chum!" Kevin Garnett steals the ball and makes a breakaway down the court, when suddenly a shark comes from underneath the floor to swallow him whole! While such an event will never happen in real life, it's a regular occurrence in the game of #IDARB, the crowd-sourced, minimalist platform arena ball game.

In #IDARB, your objective is to get the ball into the opponent's goal. The level is set up as a 2-D platform-based arena, and the only tools at your immediate disposal are the ability to move, jump, double-jump, shoot, and, in the case of playing in teams rather than 1v1, a pass option.

That may not sound like much, but it is all that #IDARB needs. The initial rush for the ball sets the pace of the game. You and your opponent dash and drop to get to the central platform. You've grabbed the ball! Do you drop through the platform and try to ascend for an easy shot, or do you play footsie with your foe to try to slip past them as they attempt to swipe the ball from you? Ah, you've managed to evade their attempts to steal! You're on a path to an easy lay-up! But there's that familiar pulsing sound of your opponent frantically spamming their "shoot" button to swat the ball away and deny you your easy points. The ball goes flying across the stage, and the two of you take off to reclaim possession.

Every moment of a #IDARB match is filled with energy because, at any second, you or your opponent could get the angle necessary to set yourself up for points. Of course, if the easy lay-ups aren't your style, the more challenging three- and five-point shots are there to fill the void. The level's design is deliberately put together to offer perfect angles for long-range shots so that, once you've learned them and added them to your arsenal, you've gained a new tool for your adversaries to fear.

The scoring system further enhances the competitive drama. Your opponent has taken the ball. He stops on the central platform and aims at the platform above him! He shoots. The ball bounces off the ceiling above him, then off a platform below … and into the goal? Each bounce multiplies the shot's score by another factor. Fifteen points for a single shot! And you thought you were clever with that five-pointer from the bottom of the stage. You won't make that mistake again. As you face off for the ball rush again, you charge and activate your Fizzics, flying across the stage and barreling through the otherwise unpassable white platforms on a collision course with the the opposing goal. You miss, but the opponent foolishly waits below you. You jump downward, smashing his head and leaving him dizzy as you line up a three-pointer at the buzzer and take the round.

#IDARB's seemingly simple action is filled with depth and tons of trick shots to discover. The game also features social media integration into both Twitter and Twitch.TV stream channels that allow viewers or random passers-by to interfere with your game through commands called hashbombs. Muscle memory reigns supreme when a viewer drops the #light hashbomb and turns off the lights, leaving the illuminated ball and your player indicator triangle as the only clues to what's going on. Some hashbombs are more benign, such as a visit from Rick Astley or the transformation of the entire stage into a circus, with each player replaced by clowns. Others have drastic effects on the physics of the game, such as flooding the stage (with water OR beer!) or covering the stage in ice.

The single-player story mode of #IDARB is simple and does its job of introducing you to the game's features. Each stage is preceded by a short conversation with the AI opposition before you are set loose to play ball. Many of the conversations managed to elicit a chuckle or two from me, whether through silliness or dry humor. Your game escalates from a 1v1 starting point with no extra features to your being joined by a coffee mug and two other players as you take on 4v4s with randomly selected hashbombs interrupting your play. I personally never lost any of the matches, but I also felt like I wasn't the primary contributor to my victories. The coffee mug had several ounces of talent to slow-roast my opponents. Even if you aren't the leading scorer, however, the post-game victory screen allows you to waggle your right thumbstick to raise your victory pedestal and claim Most Valuable Player status.

If you have a gambling itch that needs scratching without bleeding actual money, the game features a fantasy mode where two AI-controlled teams face off against one another, allowing you or any of your Twitch viewers to bet on the teams, as well as drop hashbombs to attempt to influence the game in your favor. I found myself frustrated with this particular feature, but only because Murphy's Law insisted on bankrupting me every time I attempted to bet on a team.

Online play allows you to host and invite anyone from your friend list for a 1v1 match-up or hop into matchmaking with one to four players on your console to face off against an equal number of online opponents. Unfortunately, you cannot invite an Xbox Live friend to join your team as you queue up for matchmaking, so you're stuck only with friends you've acquired in person if you wish to play anything other than 1v1 online. The matchmaking process is fast, though no skill differentiation exists to ensure that your opponent will be able to keep up with your mad skills. Additionally, laggy games occur from time to time (especially when matched against opponents overseas or across the continent), and rather than one person being slightly desynchronized and having to compensate for latency, the game ensures that players are synchronized in every frame, causing the game to play in slow motion. These hiccups are mostly minor stumbling blocks and don't regularly interrupt the ability to take the game's good time online across the globe, but they are still worth noting.

Every moment of a #IDARB match is filled with energy.

The pixilated characters are divided amongst customizable teams, such as the standard Red and Blue teams, as well as the story mode opponents such as the Moustache Cops, Your Moms, the Barbarian Horde, Old McDonald’s farm (and their later forms, Breakfast). Other pop culture teams have found their way into the game as well, such as 8-Bit Halo characters, Retro City Rampage, Intellivision, and my personal favorite, the entire roster of Iron Galaxy's Divekick.

Players may edit character appearances or even create their own characters, which can then be shared through QR codes--take a picture of the QR code on your phone, and then use the Xbox One's Kinect to scan the code. Beyond just characters, players may make team logos and even team theme songs with up to four layers of a variety of instruments. Occasionally, you encounter player-created characters in matchmaking. Don't be surprised by the Internet, however, as you get matched against literal piles of poo and phallic drawings from time to time. The realm of possibilities is expansive, and anyone who seeks to do so can make a personalized impact on the game through the game's creative tools, leaving a fallback should one ever start to find the gameplay repetitive.

For me, the game's thrilling competition is more than enough to earn the stamp of approval. #IDARB doesn't look like much, but it brings a feast to the table. It stands as proof that all it takes to make a fantastic game, even with today's available technology, is a solid set of core gameplay mechanics with inherent depth.