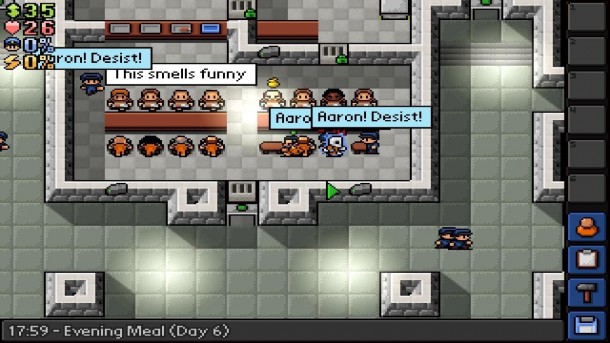 I must have counted those 12 paces a dozen times, but once more I rattle them off in my head: one, two, three, four, five, six…. From the hole I dug in my cell, covered from sight the majority of the time by my storage desk, to under the prison wall and, at last--one, two, three, four, five, six, a dozen more times--to the fresh air, the singing birds. One, two, three, four…I can't afford to this screw up, not again. That night, as the guards patrolled the darkened corridors, I reached the end of an underground tunnel I spent the last two weeks digging. I reached that twelfth step, just beyond that accursed concrete barrier, readied a shovel crafted from a sheet of metal and duct tape, looked up, and began to dig--one month to walk 12 steps, but it was worth the wait.

I am a prisoner no longer; I am an escapist.

If history and Hollywood have taught us anything, it's that breaking out of prison isn't exactly a cakewalk. And though it won't take you 19 years of tunneling through a wall with a rock hammer, The Escapists, a game about escaping prison, doesn't make the monumental task all that easy, either. Much like the bygone era of video games from which it derives its colorful, pixelated aesthetic, The Escapists is tough and refuses to hold your hand, leading to many hours of trial-and-error experiments as you test the walls of your confines. But like a beam of hope shining through the damp dirt of an escape tunnel, the tribulation is worth it in the end. The Escapists is challenging and tense, but also engaging and deeply enjoyable. It will take you hours to figure out how to escape your first prison, but if you're tough enough and clever enough to breach the walls, the feeling of triumph accompanying your newfound freedom will completely wash away all the blood, sweat, and tears that paved the way.

In The Escapists, your task as an inmate is to plot an escape route, all while under the watchful eyes of ever-suspicious prison guards. You enter a life ruled by routine. From the moment the early morning sun touches the prison walls, until it leaves the sky, you are shuffled into your daily stations: roll call, breakfast, work, exercise block, shower, evening meal--all of which, save for roll calls and meals, vary between the game's six prisons. Deviating from your rigid schedule, getting into fights, or getting caught snooping around another inmate's cell quickly earns the ire of the guards. "Get to it, Cam!" they shouted at me the moment I was caught meandering through the halls. "Stations, Cam!" The more you push their buttons, the higher the on-screen heat meter rises. If it reaches 90 percent or more, guards rush you at first sight, batons swinging, rewarding your tangential behavior with some bruises and a swift visit to the infirmary. But investigate you must, as every historic breakout needs to start with a plan and a keen understanding of your new home.

Escaping requires cunning, strategy, and proper equipment, and staying at least five steps ahead of your pursuers is essential to securing your freedom. The beauty of The Escapists, however, is that there is no wrong way to go about it. You could swipe plastic spoons and forks from the canteen and use them to dig a tunnel out of your cell. Or perhaps, as you walk the grounds during your work station as a gardener, you notice that if you take the job of the tailor (another inmate), you will gain access to a room that shares a wall with an enclosed, empty space. Disrupting him on his way to work gets him fired, allowing you to take the job, bust down the wall, and replace it with a poster. And just like that, you have an area to store tools and other materials, or even to start a tunnel, safe and secure from prying eyes. Completing favors for inmates earns you some extra dough to line your pockets with, and--along with handing out gifts or cash—also raises their opinion of you. If they like you enough, you can recruit them and create your very own chain gang to terrorize both prisoners and guards alike. Gain enough followers, and it’s possible to take over a prison. I haven't done it yet myself, but it can be accomplished, as the developer notes, with "a lot of rope."

And there are so many other possibilities. You can knock out guards and use a putty mold to copy a key, shimmy down walls with a grappling hook, or even impersonate a guard. Whatever steps you choose to take feel personal and never scripted. It's a surprisingly deep and complex system that I didn't expect but quickly fell in love with. It's highly malleable and widely varied, allowing you to make every trip to the Big House a different experience, while staving off dull repetition.

Along the way you spend time developing the game's light RPG attributes: strength, speed, and intellect. The former two go toward your proficiency in fights, with strength pulling double duty by adding to your overall health. Intellect, however, is the most paramount of the bunch, as it requires a level of smarts to craft certain items. In other words, you can be weak and slow, but it's nigh unto improbable for a dumb criminal to manage a breakout. Skill progression requires that you spend some extra time sweating in an exercise area for strength and speed, while you gather more intellect by popping open a book in the library or browsing the Internet on a computer, though you will need to take a break during these activities to decrease your mounting fatigue. Points added to your abilities slowly decrease over time, making it necessary to boost them back up every so often.

At times, fellow inmates--indicated by a flashing gold bag above their head--will offer items to purchase. What goods are available is completely random, and their usefulness to you pivots on what you need to make your escape. Sometimes you'll find hot items such as duct tape, (which is worth its weight in gold), a screwdriver, or nail files; but on other occasions, only soap or a packet of mints. The suppliers, as well as the items being sold, change randomly throughout a given day, so you need to stay on top of who is selling, and what. Rifling through the desks of other inmates, as well as the pockets of unconscious prisoners following one of the many prison fights, may also yield materials. But again, what you find is random.

Materials purchased or "borrowed" from your fellow inmates are used to craft tools and other items. Throughout the game, you gather an eclectic mishmash of components such as wires, a bottle of bleach, a piece of timber, a bar of chocolate, a plastic comb, and much more. All of which, believe it or not, can be vital pieces in your escape--yes, even the chocolate, but you'll need to find a lighter and a small blue cup first. You can throw up to three items into the crafting menu and hope that you will create something of use, but you're probably better off finding or purchasing crafting recipes as you go along. The best tools are those fit for the job, so if you're keen on digging your way to freedom, creating a shovel is your best bet. Or, if you're feeling sneaky, you can fashion a makeshift guard uniform using a tub of bleach, prison clothes, and some blue ink. There are dozens of craftable items, including a pickaxe, wire cutters, zip lines, and more, all of which play a role in many escape plans.

It is, however, equally important to remember that these items are contraband. Distinguishable by a red name, contraband is confiscated if you're caught. Mistakes are costly, and one slip-up leaves you with nothing to show for your troubles other than bruised pride and a trip to solitary confinement. Failure in The Escapists can be downright heartbreaking. An error can be simple, such as forgetting to replace a vent cover or carelessly leaving tunnel dirt in a place where it can be discovered and traced back to you. Once, a tunnel filled with tools I had built and collected was discovered, and I lost everything, putting my progress back about six hours. More difficult prisons are dotted with contraband detectors, and if you pass through one with something prohibited in your pocket, the heat meter rises to 99 percent, causing any nearby guard to make a beeline straight to you.

Beyond getting caught, there are other things that can go wrong, but they’re mostly on a technical level. The game has bugs, the most innocent of which are times when you can see the name of an item hidden in a tunnel below by hovering your mouse pointer over an item one floor above. Worse, however, are issues that can hinder an escape, such as a bug that turned a fake fence I installed into a real one, and I didn't notice the error until it was too late--this happened more than once. And then were the several times I couldn't break through the dirt in order to leave a tunnel. Other problems are merely irritating, such as overlapping text when completing the same favor for two different people. At times, items disappear from the pockets of unconscious prisoners. I could never tell if it was the guards that found and took them, but I do recall moments when items would vanish into the ether without anyone else being close enough to touch the body. Also, I can't understand the logic behind the heat meter refusing to decrease after I fall asleep. And I'm not a fan of the fact that the first thing I eat in the morning is a club sandwich (well, more like a “baton,” but the joke doesn't work that way).

Despite its foibles, The Escapists is a gratifying game that provides dozens of hours of entertainment. Planning an escape and watching it unfold is endlessly satisfying, and a successful breakout leaves you feeling jubilant. Even after you master the game's six prisons, there are three extras waiting to be challenged. The Escapists will have even more to show as time goes on, according to the developer, which is currently working on a free standalone application that will allow you to create and share your own prisons. You might not want to live in one of The Escapists' prisons, but you will definitely enjoy the visit.