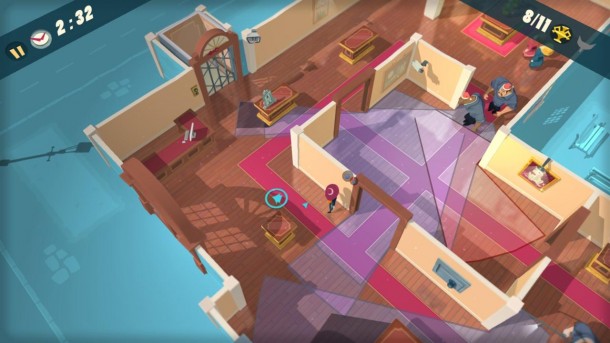 We need more heist games in our lives. Stealth games are a dime a dozen, but only in heist games are you required to play with confidence. We need the thrill of strolling into a heavily-guarded museum or bank and lifting priceless items from under everyone's noses. And we need to feel vindicated and smug as we walk out of the place with no one the wiser. That's the essence that The Marvellous Miss Take attempts to embody, steering you to fearlessly swipe paintings and sculptures under the careful watch of patrons and guards. But though the game wants you to feel like you're overcoming incredible odds thanks to your innate cunning, its unreasonably small levels and erratic enemy behavior destroy the very confidence it demands of you.

But first, you're eased into a life of crime. You play as Sophia Take, an art enthusiast who saw her great aunt's collection swindled away and split among greedy one percenters. She takes matters into her own hands and sets out to steal the art back. (She even resembles everyone's favorite world-class educational thief, Carmen Sandiego.) Though Miss Take is brimming with resolve, she soon reveals that she's a little unsure of herself to Harry Carver, a well-to-do and benevolent master thief who she bumps into in the middle of a caper. Together with Harry and pickpocket Daisy, Sophia slowly accumulates more and more of her great aunt's collection, gaining more confidence with each heist. These three figures form the core of the game's story and characterization, and, though it's tempting to paint them as one-dimensional afterthoughts, the game pulls off some subtle tricks to fill in the gaps.

Sophia's initial uncertainty carries into the player experience as well. You must abscond with all the art on the current floor and then either board an elevator or make your way to the exit. Guards' fields of vision are represented by giant blue cones that protrude from their eyes as you look down on the floor from a semi-isometric view. The levels themselves are cramped, with guards' vision often filling 75 percent of a room, making success seem impossible. But the game invites you to overcome these feelings by trying to gradually make you realize the ease with which you can accomplish your goals. The controls are dead simple, as the game can be played solely with the mouse. Just click on a spot, and Sophia moves there. Hold down the left mouse button and she starts running, though her haste makes noise that attracts guards, as does whistling by holding the mouse button down over her.

You start the game feeling intimidated by the sheer number of blue cones covering the levels. You feel shy about walking up to grab a painting while a guard's back is turned, but you learn to time your pacing in order to boldly walk to your target before the guard is any the wiser. You're afraid to set foot in a heavily-guarded area for fear of stepping into a guard’s field of vision, but being seen doesn't get you caught immediately. Instead, a glimpse of you only gets a guard's attention and lures him or her to the last point at which you were seen. Stay in sight too long and you alert the guards, but duck out of sight in time and you can lure guards to wherever you need them to be.

Even Sophia’s partners' side missions encourage you to come out of your shell. Harry has a leg injury and needs a cane to walk, so he's unable to run. This means that his heists happen at night when guard activity is at a minimum. He must sneak around armed with only a weird ball-like contraption, which makes noise when thrown against a wall. This teaches you not to rely on running to and fro and also encourages you to actually use the many power-ups the game gives Sofia, such as smoke bombs that block vision or teleporters that let you make a quick getaway. Daisy's missions, on the other hand, require you to get up close and personal with guards, picking their pockets to get keys and make off with a safe's contents. Though Daisy's prowess at pickpocketing means that she can approach guards without them becoming suspicious, it teaches you, when being Sophia, not to be so timid when it comes to worming your way through the guard-filled minefield. When you start getting the hang of navigating the security and playing the guards like saps, your confidence starts to snowball until you feel like a master thief. And clearly Sofia does too, as after clearing a level, she puts her hand on her hips and throws heavy shade at the mooks she just put to shame.

The moments in which you should be slipping past a heavily-guarded room to snag a bust are often ruined thanks to a guard who happens to turn the wrong way.

At least, that's the experience the game wants you to have, and occasionally it succeeds. But, though the game attempts to convey scenarios that make you feel like you're succeeding against all odds, the game commits the sin of actually stacking the odds against you. The fact that most rooms are bathed in blue does make the levels somewhat unmanageable even when you learn all the tricks. The cramped corridors and tiny rooms make maneuvering more of a chore than it needs to be. Worst of all is the inconsistent enemies, who, aside from the frequency with which they change direction, are completely unpredictable. Guards patrol in whatever direction strikes their fancy with seemingly no rhyme or reason. Now, not having predictable patterns isn't necessarily a bad thing if a game is designed with unpredictability in mind, but with so little space to work with and only one tool at your disposal at a time, you often find yourself waiting for an enemy to happen to wander to just the right spot so that you can enact your plan. This also means that the moments in which you should be slipping past a heavily-guarded room to snag a bust are often ruined thanks to a guard who happens to turn the wrong way. This takes your supposed skill out of the equation somewhat and makes the game a frustrating slog.

It also doesn't help that the world itself isn't terribly interesting. For a game that seems built on slick intrigue, the levels themselves all play just about the same, albeit with varying degrees of frustration. Each floor you have to tackle is just a bunch of hallways connecting a bunch of bigger rooms. You barely ever get to use the environment to your advantage in clever ways, adding a thick layer of monotony to proceedings. Gimmicks such as dogs who can smell your footsteps, security cameras, and lasers add some much-needed variety, but once you encounter them once, you've seen all they have to offer. Levels also offer no visual panache, looking very sterile and plain, which is disappointing because the game's soundtrack embodies the slick, stylish world of high-class thievery.

The Marvellous Miss Take aims to be a different kind of confidence game, one in which you stroll into a level like you own the place and take whatever you wish with ease. All the pieces are in place to build you up and make you a virtual master thief, and Sofia's journey is the perfect embodiment of this process. It's just a shame that the game's level design and enemy combine to short-circuit the experience throughout, because there are so many individual pieces that make the game really easy to like. Sofia deserves better.