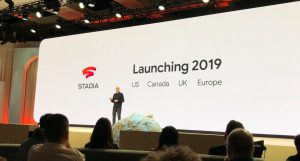 Google is launching its Stadia cloud gaming service at the Game Developers Conference (GDC) in San Francisco today. Google CEO Sundar Pichai, who says he plays FIFA 19“quite a bit,” introduced the Stadia service during a special keynote at GDC this morning. Describing it as a platform for everyone, Pichai talked up Google’s ambitions to stream games to all types of devices. Stadia will stream games from the cloud to the Chrome browser, Chromecast, and Pixel devices, and it will launch at some point in 2019 in the US, Canada, UK, and Europe.

Google demonstrated moving gameplay seamlessly from a phone to a tablet and then to a TV, all using Google-powered devices. While existing USB controllers will work on a laptop or PC, Google is also launching a new Stadia Controller that will power the game streaming service. It looks like a cross between an Xbox and PS4 controller, and it will work with the Stadia service by connecting directly through Wi-Fi to link it to a game session in the cloud. This will presumably help with latency and moving a game from one device to another. You can also use a button to capture and share clips straight to YouTube, or use another button to access the Google Assistant.

To power all of this cloud streaming, Google is leveraging its global infrastructure of data centers to ensure servers are as close to players around the world as possible. That’s a key part of Stadia, as lower latency is a necessity to stream games effectively across the internet. Google says it expects to support up to 4K at 60 fps at launch over an internet connection with approximately 25Mbps of bandwidth, and it’s planning to support up to 8K resolutions and 120 fps in the future.

STADIA HAS MORE TERAFLOPS OF POWER THAN AN XBOX ONE X

Google is partnering with AMD to build a custom GPU for its datacenters. It’s a chip that Google claims will deliver 10.7 teraflops of power, which is more than the 4.2 teraflops of the PS4 Pro and the 6 teraflops of power on the Xbox One X. Each Stadia instance will also be powered by a custom 2.7GHz x86 processor with 16GB of RAM.

One of the first games to launch on Google’s Stadia service will be Doom Eternal, which will support 4K resolution, HDR, and 60 fps game play. Doom Eternal doesn’t have a firm launch date just yet, but it will also be available on PC, Nintendo Switch, PS4, and Xbox One. Stadia will also embrace full cross-platform play, so developers can enable cross-platform multiplayer and game saves and progression.