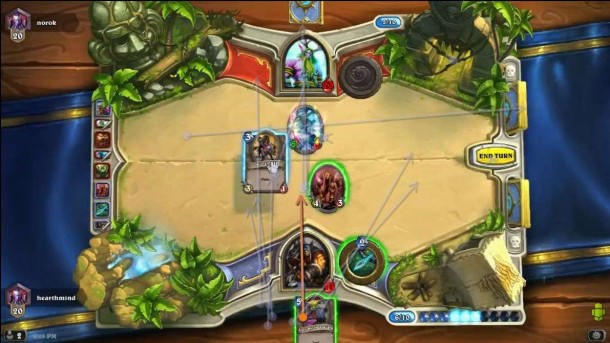 After Twitch Plays Pokemon proved that groups of people attempting to collaboratively play an RPG together online could be fascinating to watch, Hearthmind is now attempting to do the same with Blizzard's free-to-play card game, Hearthstone.

Similar to Twitch Plays Pokemon, Hearthmind allows people to watch the game as it's being played and input commands they want to see. Hearthmind allows viewers to "vote" for a command by clicking and dragging their mouses on-screen and then carries out one of these votes every five seconds. You can see other viewers' votes as grey lines and arrows, and every five seconds one goes orange, designating it as the chosen action. By contrast, Twitch Plays Pokemon offered two different methods of input (registered through chat messages) at different times: one where every command was registered, and one where viewers voted.

Another wrinkle here is Hearthstone's multiplayer component: The various Pokemon games tackled by Twitch Plays Pokemon were played as single-player games, but Hearthmind matches are being played against real players over the Internet. If you're persistent enough, you could, in theory, manage to accept a friend request and play the Hearthmind Battle.net account online.

In the meantime, those unlucky enough to happen upon the account through matchmaking are faced with the Hearthmind-controlled account taking a long time to get anything done. Fortunately, a timer in Hearthstone forcing a player's turn to end prevents the Hearthmind account from keeping the opponent from taking a turn indefinitely.

Despite saboteurs that can be seen attempting to end a turn preemptively, the Hearthmind account has--miraculously--managed to win a number of ranked matches so far.