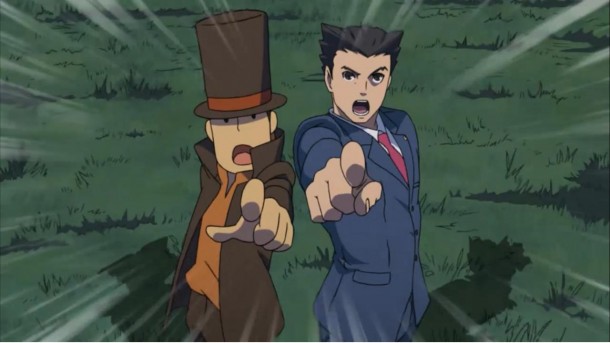 Professor Layton vs. Phoenix Wright: Ace Attorney, the long-awaited crossover between the two franchises, has finally arrived in North America, almost two years after it was originally released in Japan. The first reviews went live this week, and we've gathered up a selection for you to peruse below.

The game is a collaboration between the respective developers of the two series, Level-5 (Professor Layton) and Capcom (Ace Attorney). It consists of separate sections that each play similarly to games in the two series; unfortunately, the consensus seems to be that it doesn't totally capitalize on the crossover potential. Even so, the reception has been generally positive, and it's good to see the game released here after such a long wait.

You can check out a sampling of reviews below. For more, check out GameSpot sister site Metacritic.

"Layton vs. Phoenix Wright is a long game--at least as long as a Professor Layton game and a Phoenix Wright game combined--and relatively little of it is genuine crossover. But that doesn't make it any less enjoyable. What is here is big, it's often silly, and it's sometimes unwieldy, but it's rarely anything less than engaging thanks to some great execution on tried-and-tested ideas. It's Phoenix, however, in his element in this magical world, that well and truly steals the show." [Full review]

"Personally, I enjoyed the light romp through Layton and Wright's magical adventure. It's good to have a bit of change from the deadly serious or overly involved games I usually play; outside of the lengthy Witch Trials, Professor Layton vs. Phoenix Wright is the kind of game you can pop into for 5-10 minutes to make yourself feel smarter." [Full review]

"This unique crossover is a powerful draw for fans of either series, but it doesn't make the most of its potential. It sacrifices some of both series' challenge, and the alternate-universe story feels like a missed opportunity where there could have been more meaningful interaction between the worlds of Wright and Layton. The witty dialogue writing, however, is as charming and enjoyable as ever." [Full review]

"Professor Layton vs. Phoenix Wright: Ace Attorney is an extremely satisfying pairing--if not actually a blend--of the puzzle solving and courtroom twists from the two series. The game's high production values add charm and character to the experience. The compelling storyline and animation make up for dialogue that might linger a little too long and puzzles that might speed by a little too quickly. If you like both nonviolent handheld heroes, 'Take That' copy of Layton vs. Wright, without hesitation." [Full review]

"A bad ending doesn't have to ruin a game, though, even (or perhaps especially) if the story wasn't all that strong to begin with. Professor Layton vs. Phoenix Wright drags on too long, but even towards the end it's enjoyable at its basest of levels. It's an entirely safe crossover that doesn't merge two gameplay styles as deeply as it could, and it's a shame to miss on that potential. However, the ultimate result is two series' with enjoyable characters and a penchant for madness coming together, and a crossover that doesn't take risks with tried-and-tested play. It also has Layton and Wright performing synchronized pointing, and it's almost worth the objections just for that." [Full review]

"Reservations aside, Professor Layton vs. Ace Attorney comes out with a game that in many ways improves upon both formulas. It may be too bogged down in its own story and look slightly dated, but the pure puzzle mechanics still work both in and out of the courtroom, and are bolstered by the crossing of ideas. It's more than the sum of its parts, and as a result is a nice treat." [Full review]