Why Bungie’s Destiny is not coming to PC, at least not right away

Start / News / Why Bungie’s Destiny is not coming to PC, at least not right away 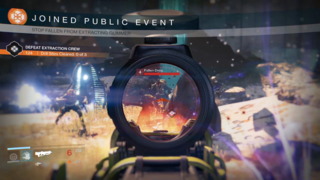 Former Halo developer Bungie has explained in a new interview why the studio's current project--the shared-world shooter Destiny--is not going to be available on PC when the Xbox 360, Xbox One, PlayStation 3, and PlayStation 4 versions arrive on September 9.

Asked by Eurogamer why Bungie is not bringing the game to PC even when the game is developed internally on that platform, design lead Lars Bakken said, "The truth is it's not that simple. "I wish it was that simple. It's pretty complicated. That doesn't mean it can't happen in the future, it just means it won't happen right now."

Bungie has not made a game for PC since 2001's Oni, though past Halo titles Halo: Combat Evolved and Halo 2 would be released on PC through partnerships with other studios. Bakken said Bungie wants to do all main development internally, and adding another platform to the mix--in this case PC--would only complicate things further, he said.

"When I'm playtesting and I'm trying to play PS4, Xbox One, Xbox 360 and PS3, that's a lot of work. Adding another thing on there is just crazy," Bakken said. "It's crazy to think of right now."

Bungie COO Pete Parsons took a similar line when approached by Eurogamer about a potential PC version of Destiny. "I think four platforms on day one is a lot, considering we've been a one platform team for a very long time," he said.

"What is also true is that, as you might imagine, we're all hardcore PC players. We play everything," he added. "It doesn't matter if it's a phone, PC or console, we play it. And there are 500 people up there. So we care a lot about the PC."

"But this is a huge and ambitious project for us, and just getting it on one console would be a momentous challenge. Getting it on four on the same day is something we've never even tried before. We wanted to get it right, and we didn't want to add in tons more risk."

Another reason why a PC version of Destiny is tricky is that all versions of the game connect to a singular persistent world, and this would require a significant amount of legwork to get right, Parsons said.

"It is not nearly as simple as you think," he said. "It is one central world no matter what the platform, and so that requires lots of intensive thought. Frankly, it's not a thought we can spend time thinking about right now. Just building up the game and putting it across generations of platforms, and working on platforms we've never worked on before with the PlayStation 3, these are very big challenges. I'm thankful we have the engineering team we do."

With a PC version of Destiny seemingly ruled out for launch, what about a release sometime later down the road? "I look forward to our future conversations around PC," Parsons teased. "We love the PC. We hear it too. We ask the question of ourselves."

Destiny is published by Activision, which believes the game could become the company's next billion-dollar franchise. For more on Destiny, be sure to read our recently published hands-on preview from our recent trip to the company's office in Bellevue, Washington.