Why is Kirby always angry in the US? Nintendo explains

Start / News / Why is Kirby always angry in the US? Nintendo explains 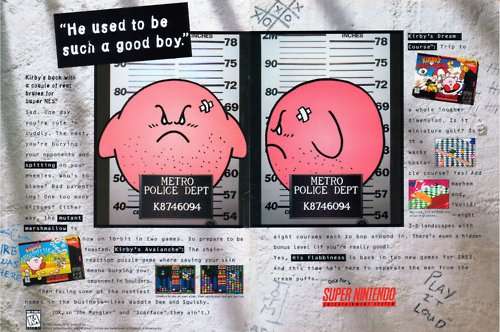 Why does Nintendo's loveable pink ball Kirby always seem to be happy when being advertised in Japan, but angry when he comes over to the US? Kirby: Triple Deluxe director Shinya Kumazaki has explained that it's down to what the two audiences get out of the character.

A neat TV Tropes page--titled "American Kirby is hardcore"--neatly summarises all the examples, with the greatest offender likely being a 1994 print advertisement for Kirby's Dream Course, where the poor little guy was shown with a bandage, stubble, and a rap sheet.

"For the Japanese versions we are, at [Kirby series developer] HAL, involved in everything throughout development, including the package design. The most powerful image of Kirby is that cute image, we think that's the one that appeals to the widest audience," explained Kumazaki in an interview with GameSpot. This cute Kirby "brings in the most people to play" in his home country of Japan.

"While it does start cute," Kumazaki continues, "we know there is a serious side to Kirby as well, and throughout the gameplay we see more and more of that, and the games themselves have quite a bit of depth. That being said, we recognise that Kirby's cuteness is his biggest draw in [the Japanese] market."

Kumazaki asys Nintendo of America controls the shots in the US, and provides HAL with "feedback and insight" into the market. "What we have heard is that strong, tough Kirby that's really battling hard is a more appealing sign of Kirby, so that's what we feature in the US."

So now you know. Kirby is angry in the US because Nintendo thinks that will make him more appealing.

GameSpot's Mark Walton has just finished playing the 3DS' Kirby Triple Deluxe, and you can read his thoughts (spoiler: he liked it a lot) in our review.

Kirby: Triple Deluxe will be released for 3DS on May 2 in North America.