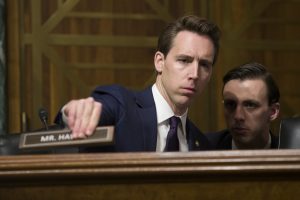 A U.S Senator has proposed a federal bill that will bring loot box and microtransaction regulations to video games.

Republican Sen. Josh Hawley proposed the bill dubbed, “The Protecting Children from Abusive Games Act” to target “the exploitation of children through ‘pay-to-win’ and ‘loot box’ monetisation practices by the video game industry,” according to a statement released by the senator’s office.

Though mostly an outline at this point, further refinement of the bill may be poised to shake the gaming industry up a fair amount if passed. (opens in a new window)

As outlined, the bill would serve to protect those under the age of 18 from potentially manipulative or predatory “randomised reward” features in games as well as those that offer “pay-to-win” mechanics that grant “competitive advantages” over other players.

If approved, the legislation would prohibit the sale of loot boxes in games that were designed with a target audience of persons under the age of 18. The ruling would be enforced by the Federal Trade Commission, treating “the distribution of such games by publishers and online distributors as an unfair trade practice”.

The Entertainment Software Association (ESA), which heads up the global rating system to assign age ratings to games known as the ESRB, was swift to respond with a statement:

“We look forward to sharing with the senator the tools and information the industry already provides that keeps the control of in-game spending in parents’ hands. Parents already can limit or prohibit in-game purchases with easy to use parental controls.”

The government and developers have quarrelled over loot boxes for quite some time, and this particular bill likely won’t be the last clash between them either. Overcoming pressure from authorities for mandation has led to multiple incidents such as Valve disabling skin trading for Dutch customers, EA being put under criminal investigation and Belgium declaring loot boxes illegal entirely, to name a few.

Back in April of last year, we defined loot boxes and our take on whether the in-game transactions should be constituted as gambling or not. Regardless of your stance on the matter, the passing of said act could have severe implications on the microtransaction-driven business models of many of today’s game developers.

As of now, the description of how regulators will attempt to distinguish games that violate these terms seems a bit broad and subjective. The outline of the bill states it will identify the targeting of an underage audience through “subject matter, visual content, and other indicators similar to those used to determine the applicability of the Children’s Online Privacy Protection Act (COPPA)”.

If it’s any indication of who the bill be targeting, Activision’s mobile hit, Candy Crush, was cited in press materials announcing the bill, using the game’s $150 “Luscious Bundle” as an example of a pay-to-win structure. Undoubtedly a lucrative model, microtransactions saw players spending an average of $4.2 million a day on Candy Crush in 2018, according to a report by VentureBeat.

It’s unlikely the war on loot boxes and microtransactions will wane off anytime soon barring the steadfast attempts from regulators to grab hold of this colossal trade. If the gaming industry doesn’t start to moderate this column, odds are the government will do it for them.

Esports Insider says: Though the bill includes some loose-wording in terms of how they’ll look to identify games with underage audiences, its fruition has potential to send a tremor through the industry in one form or another. We’ll be sure to keep a watchful eye on any developments to come from this story to see if we do get actual loot box and microtransaction regulations.

The ESI Podcast: the opportunity at the intersection of esports and gambling