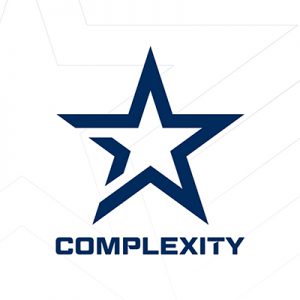 North American organisation compLexity Gaming has unveiled a new look that represents “its continued commitment to the advancement of the esports industry.”

The organisational rebrand involves a new logo and colours, an updated website, new merchandise, and a refreshed company manifesto.

Jason Lake, Founder and CEO of compLexity Gaming discussed the change in a release: “We’re not just changing a logo. We are building upon Complexity’s legacy as an innovator in the space by paving the way yet again. This expanded vision takes everything we have learned over the course of the last 16 years as a premier esports organization and levels it up — setting a new standard and revolutionizing how esports organizations should operate.”

compLexity Gaming’s new manifesto is based off of the five points of the star in its new logo. The organisation has created its own “five C’s” of competition, community, culture, cause, and convergence to help illustrate its renewed focus.

Dubbed the GameStop Performance Center, the organisation unveiled its new 11,000 square foot headquarters alongside the announcement of its three-year deal with GameStop in March. Opening this month, it’s located at The Star in Frisco, Texas next to the headquarters of Dallas Cowboys.

Esports Insider says: compLexity isn’t messing around in 2019. From deals with MSI, HyperX, and GameStop, to a shiny new home base, to a whole new identity, the organisation is gearing itself up for the future with the backing of Jerry Jones and his NFL franchise.