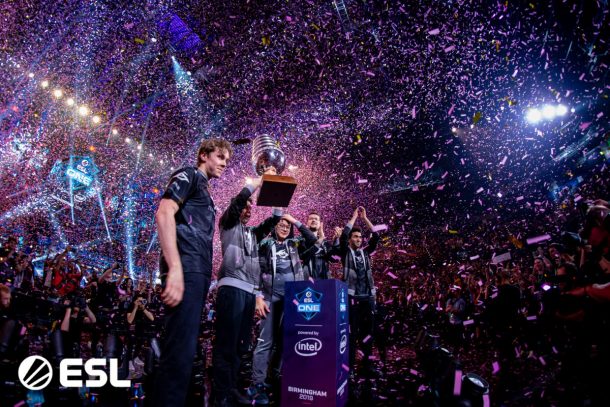 It has been less than a month since Team Secret‘s nailbiting 3-2 victory over Evil Geniuses at ESL One Birmingham, and by the viewership numbers, it proved to be an outstanding success.

Over the course of the event, ESL One Birmingham surpassed the highest viewership for an ESL One Dota 2 event thus far and saw a rise a very significant rise with over 7.6 million hours being consumed over the course of the Dota 2 filled weekend along with a footfall of over 24,000 fans at Arena Birmingham. The tournament reached a new peak concurrent viewership record of 306,070 tuning into the broadcast which broke the record last set during the Hamburg Major in 2017.

The event also drew the attendance of UK Minister for Digital and the Creative Industries, Margot James. The Minister met with the players, teams, as well as the production crew and commented that “it’s opened [her] eyes to the sheer variety of careers that are on offer in the esports environment.”

Reflecting on the success of ESL One Birmingham, Scott Gillingham, UK Gaming and Esports Lead at Intel UK said, “We have seen incredible support from the UK esports community in the last year, so it’s been fantastic to return with ESL One Birmingham in 2019. Intel is committed to the future of esports, from hosting major tournaments to investing in the ideas, communities, and talent to show the world that esports is here to stay.”

ESL UK CEO James Dean was similarly proud of the event’s success, commenting, “Birmingham did it again for the second year running. The crowd was electric, memes were rife, the dotes were incredible and yet again records were set. It’s safe to say ESL One has found a true home in Birmingham. It was an honour to welcome Margot James to the event, a very exciting demonstration to the entire UK esports industry of support and enthusiasm from UK government. I am very excited about what the future brings for the UK esports scene.”

Esports Insider says: ESL One Birmingham proved to be an absolute cracker of an event and the numbers seem to back that up. The fact that Margot James MP was there to see some of the best that the UK esports scene has to offer is another positive step as several industry leaders seek to build better relationships with the government.