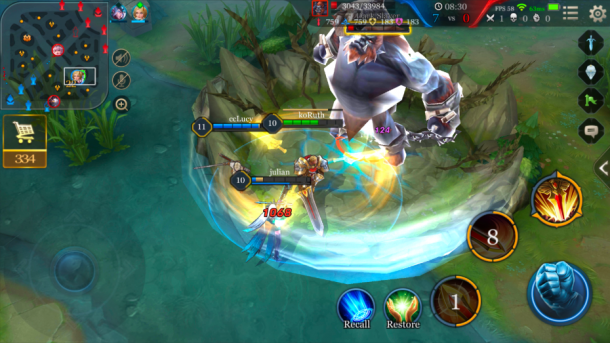 Telecommunications manufacturer Qualcomm has joined up with Tencent and Vivo on the development of a new AI venture dubbed ‘Project Imagination’.

The joint announcement from all three companies came during the Qualcomm AI Day in Shenzhen. As part of Project Imagination, testing will utilize Vivo’s latest powerful, high-performance smartphone, the iQOO. The phone is said to be purpose-built for mobile gaming and will utilise Qualcomm’s Snapdragon 855 chipset and fourth generation AI engine.

Along with the two manufacturers, online gaming goliath Tencent will test the Project Imagination AI through their MOBA Arena of Valor (known in China as Honor of Kings). Tencent will also provide support for AI development through their offices in Shenzhen and Seattle.

In addition to testing the AI through Project Imagination, Vivo also have an all-AI esports team labelled as ‘Supex’ in the works. Vivo’s General Manager of Creative Innovation, Fred Wong commented that Supex will “ultimately deliver better competition experiences to mobile esports.”

Project Imagination and Supex come following similar developments in the MOBA scene, particularly with Dota 2’s OpenAI which grabbed headlines last year when it defeated a group of noteworthy personalities in the scene, and recently defeated 2018 The International champions OG. While there are limitations to certain variables including the heroes available to choose, the fact that OpenAI is able to learn at a rate of 180 years of gameplay per day has piqued the interest of many both inside and outside of esports in this kind of AI development.

Esports Insider says: With such large parties involved, the new partnership certainly isn’t short of resources. These kinds of AI developments in esports are certainly useful for testing the limits of the technology we have available today more broadly. For this writer, the thought of an all-AI esports team is a mixed bag. It could be exciting to see it used as a kind of ‘hyperbolic time chamber’ for pro players to then come out and compete. Call me old fashioned, but the thought of an all-AI team actively competing in tournaments circumvents what makes esports exciting, incredibly talented people being pushed to the limits of their skills.

ESL announce Arena of Valor ‘Clash of Nations’ in Jakarta