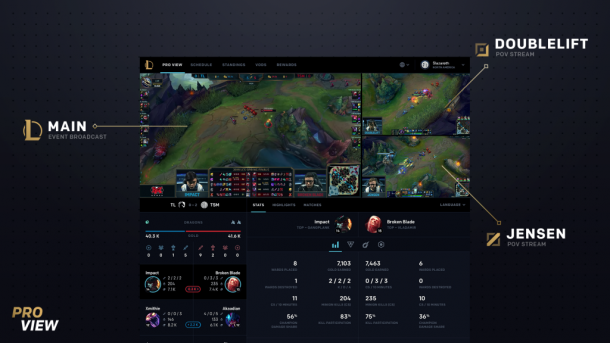 Fans will still be able to watch LoL esports on their prefered streaming platform or device for free. Riot Games said in a press release: “Our goal is to create a holistic viewing experience that’s optimised for League of Legends esports while still allowing fans to watch on the streaming platform of their choice.”

League of Legends fans will be able to purchase League of Legends Pro View via Watch.lolesports, €14.99(£13) for regional access or €19.99 (£17.50) for full access. Proceeds will go directly to supporting the LEC & LCS sides.

Pro View will offer a number of viewing options, such as:

Watch.lolesports.com is the hub location for this new feature, which has seen recent additions to its global schedules, VoDs, live stats, watch rewards and the newly announced Team Pass & Fan Pass.

Esports Insider says: League of Legends is one of the most popular esports titles in the world. The recent announcements of more profit sharing announcements and this latest one that aims to improve the viewing experience offered something akin to the Overwatch All-Access pass. It will be interesting to see if Riot Games adds more features or exclusive items to the Pro View in the future.